A rare trade and sight these days. He has never seen one before so we bought two cones. In my current estate, we used to have one that went around in the evening honking his horn and we would run out upon hearing it. It's a pity it's a dying trade these days. I don't take coffee but I do enjoy a cuppa tea every now and then. In fact, I've quite a few flavors in my kitchen cupboard. My quirky tea set is on it's way but I decided that these were too cute to pass on. 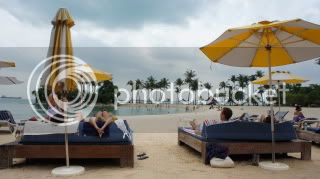 I hope everyone had a swell long weekend. It's been perfect for us both so far. Reunion dinner, lunch at home, caught a movie, ran 4 times this week, did 75 minutes of hot yoga, went to 2 house parties and caught up with current friends (and made new friends), ate loads, bummed around loads and finally, finally, we made our virgin visit to Tanjong Beach Club (TBC). I said finally, because we've been talking about it for a long time, tried to head down last weekend but as everyone knows, it rained continuously for 60 hours so scratched that.

We almost fainted when we saw the snaking queues for the Sentosa tram but thankfully, it turned out to be just a 5 minutes wait to get on. There were so many people, barricades were set up to control the crowds -_- We were half afraid that the beaches would be packed silly but thank goodness, most of the crowd dispersed into Universal Studios and other parts of Sentosa except TBC :P

TBC mainly attracts the expat crowds and if you don't fancy chilling out with young kids around, it'll likely not be a choice option for you. I personally love the ambience and it was relaxing. The weather was perfect - not scorching hot and the clouds came out every now and then so I got slightly tanned but not burnt which was what I was hoping for! I'm no longer a young chicken so lounging out in the sun for hours and getting age spots is no longer my thing!

Food and drinks are great. TBC is owned by the same group that runs White Rabbit, Loof and Overeasy so it's a huge plus that food is yummy and the drinks aren't watered down. The sliders were great and a jug of Pimm's (serves 4) is recommended for those that prefer a light alcoholic option. It was strange that the music was turned on much later in the afternoon but when they did, it was great. I have no idea why some beach places love pumping out loud techno music but at least TBC plays nice chill out music at a volume where you don't have to shout to hear yourself.

The pool side is fairly big so you can get a few decent laps in or just sit and relax without having to jostle for space with the kids. They didn't seem to provide towels so it was a good thing that we brought out own. After hearing horror stories from my friend who lounged on a public beach bench for hours and landed up with some sort of fungal infection on his back and had to go to the doctor for treatment, I decided that I'll always bring my towels so that my skin isn't in direct contact with the chairs.

If you ask me, it was the perfect Saturday afternoon, great weather, food and company. I couldn't have asked for more! And I reckon we will be back!

I still can't fathom why I don't enjoy coffee. I've tried it several times but each time, I can't bring myself to enjoy the aromatic taste of coffee - love the smell but not the taste. Strange huh? It's a pity because there are a number of quaint coffee cafes have popped up here.

C introduced me to this lovely hidden place of a gem called Loysel's Toy. It's in an unexpected location, quite atypical I must add but it's like truly a hidden treasure. It's only been opened for a month so the menu is not quite complete and they are still adding food items onto it. But what they currently lack is definitely made up for in terms of service (excellent and friendly) and the ambience is lovely. The decor is rustic, the outdoor chairs look even slightly 'battered' with hints of rust and peeling paint but it all adds to the uniqueness of this little establishment. I can picture myself sitting quietly by myself with a stack of magazines and iPad on a quiet weekend. Perfect for enjoying some me-time.

As I don't drink coffee, I requested for their tea selection which is modest - 3 choices. I chose the earl grey with lavender (if I heard correctly). Though slightly pricey (I believe it cost S$9), the tea was fragrant sweetened with two cubes of sugar (it's more than enough), a tiny cookie, all arranged on a long white plate. The duck salad looks plain but it's surprisingly tasty. Loysel's Toy is generous with the roasted duck meat accompanied with loads of pomelo bits (my absolute favorite), pine nuts, some red chili slivers all tossed up in a clear dressing. It was reasonably priced at about S$6-7.

And as a true testament of how bad my sense of direction is, it took THREE people to get me to Loysel's Toy. Given that it wasn't the easiest location to picture but when B.T (without asking, probably because he was afraid I'll land up heading off in the opposite direction as usual) personally drops me off at the bus-stop, tells me which bus to get on and ensures my Google maps has it keyed in AND double checks if I have my iPhone), C sms-es the full address and asks me to holler if I get lost and it follows by a phone call which she lands up chatting to B.T and him assuring that he's got me sorted out in the right direction, followed by her sending me a screen grab of the map - just in case. Then after I get off the bus (at the correct stop - applause please) and actually walk in the right direction, yes, right direction for once but turns back halfway thinking I got it wrong, C sms-es asking me to call when I've reach, probably because I told her I alighted at the Sri Marital Temple (instead of Manmatha). H drives out to pick the lost goat up and drops me off right at the door-step of Loysel's Toy before going home. Major fail. I swear B.T heaved a silent sigh of relief when his goofball reached home yelling, Honey! I'm home!


Next stop, I would like to check out Papa Palheta - yea though I don't drink coffee!