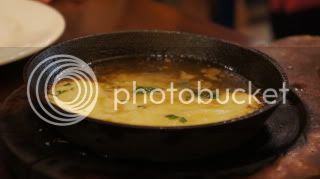 I do admit that whenever I visit Manila, I would land up eating all other kinds of cuisine instead of the local food. The local food has too much pork and most of the stuff are deep fried and oily. It's a pity that I don't enjoy the local food as much as I should but my tastes buds just don't agree with it.

Cyma (pronounced as See-ma) is a Greek/Mediterranean that serves a good gyro. The first time I tasted gyro was by the road side stall somewhere in Europe or the States. I love the juicy chunks of meat that is mostly stuffed inside a soft pita-like bread. The ones that I had came in a smaller size but the one at Cyma was large enough for a meal.

I'm now wondering if there is any place in Singapore that serves a good gyro?

I had to take a picture of this because it was such a cheery picture - the colors and line of white paper birds cascading downwards. I was about to take a better shot when the security guard stopped me from doing so.

I never understood. What is it with shopping malls that do not allow you to take photos? Or food restaurants for that matter.

Waffles with dried cranberries and pecans 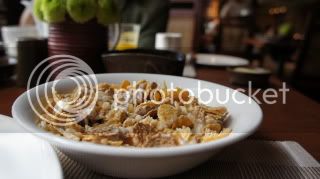 When traveling in Asia for work and having the privileage of staying at a nice hotel that offers a breakfast buffet spread, I often get (too) spoilt for choice and land up selecting the same items day after day. I'm a creature of habit I guess.

For this trip, it was my regular mixed cereals (always a mix of rice pop bubbles, bran, cornflakes, dried fruit and yoghurt) and I had a strange craving for waffles. Not exactly wholesome, but it kept me nice and full till lunchtime.

So what do you eat for breakfast typically when traveling for work? The day after the marathon, the weather remained hot and I got away with wearing just a pair of shorts and tee and my low cut boots. Then the weather did a 360 degree turn, we knew something was up when we spotted a low hanging fog and it became freezing cold. I almost shivered to death!

The weather got much cooler and it was true Fall weather so I wore my thick stockings for the rest of the week. Even if it wasn't that cold, I would pack a pair in and throw in an extra cardi or two - just in case. And since I refused to bring more than 1 jacket, I re-used my woolly to death. Likewise for my shoes - brought 3, and bag - just 1.

Scored a few cardis on this trip so I'm happy. I'm still looking for my trench though. And my polka dotted Uniqlo leggings tore. *cries